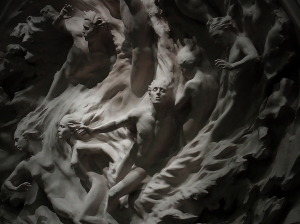 Many thanks to Fr Aidan for celebrating our one year birthday here at An Open Orthodoxy with a thoughtful and challenging post. We thought we’d share a few points of agreement and disagreement with Fr Aidan’s comments.

A second related point of agreement is CEN (creation ex nihilo), but not CEN vaguely related other core claims; rather, what really is implied about God and creation by CEN. It’s our observation that the most open theists tend to do with CEN is use it to distinguish themselves from process theists by affirming God’s freedom from creation. But we mean the why behind CEN. When explored with more attention, CEN led Dwayne and me to embrace other important traditional features about God. It began with facing the most obvious entailment of CEN, namely, the utter and absolute gratuity of creation (on the one hand) and the utter, absolute and necessary (i.e., transcendent) fullness of God.

It’s precisely here where Dwayne and I would begin to disagree with Fr. Aidan as regards the temporal status of God’s relating to the created order. In spite of there being important ways to qualify terms like ‘experience’ and ‘temporal’ (and even ‘knowing’, ‘perceiving’ and ‘relating’) when used to describe God as creator and sustainer of the temporal world, we’re not convinced that creation is any less gratuitous or God-dependent in those senses worth affirming if God is believed to have (qualifiedly) temporal experiences of the world. In fact, it’s because we affirm God’s freedom from the world that we think God should be conceived of as ‘actually’ free from creation and not merely ‘formally’ or ‘abstractly’ free from the world.

It’s our conviction that the divine actuality (as the plenitude of being, as unimprovable aesthetic satisfaction, as the utterly complete and imperturbable divine relations) is free from creation which encourages us to conclude God is ‘actually’ free from creation, not just free on paper (‘formally’ free, as it were). But in the classical view of God as actus purus, God is never ‘actually’ free from his determination to creation. On the contrary, God actually just is his determination to create and that determination defines him essentially, eternally, etc. (as McCabe shows — there is no God apart from the God who creates), which to us denies that God is free from the determination to create. We think a qualified view of divine temporality can better affirm both the essential divine freedom and triune fullness and creation’s absolute gratuity without historicizing that transcendent fullness by assuming God becomes God in all the objectionable ways process theology (on the one hand) and Jenson and McCormack (on the other) advocate.

For an interesting take on the Fathers view of divine freedom and temporality, see David Bradshaw’s “Divine Freedom: The Greek Fathers and the Modern Debate” in Philosophical Theology and the Christian Tradition: Russian and Western Perspectives, 77-92, and “Time and Eternity in the Greek Fathers,” The Thomist 70 (2006), 311-66. Fr Aidan’s post is a good prod to Dwayne and me to finally get around to arguing that Bradshaw’s understanding of God’s relationship to time doesn’t preclude the sense in which God ought to be viewed as temporal by open theists.

Thanks again Fr Aidan for giving us much to think about. McCabe is on our to-buy list!

6 comments on “Kudos to Kimel”