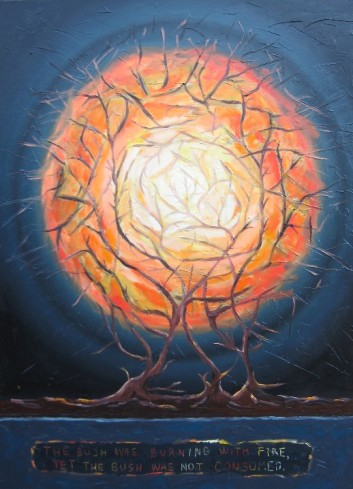 I’m always intrigued by readings of Exodus 3 that see the divine name “I am” as revealing God to be timeless. God, so I’m told, didn’t reveal himself as “I was” or “I will be.” He is the “I am,” meaning, among other things, the timeless One. That God is self-existent can’t be reasonably doubted. That God is the source, ground and sustainer of all things is, also, just the Christian view of things. But that Scripture offers us a ‘timeless’ God seems much less certain. That said, I’d like to offer a couple of comments on Ex 3.

You know the context. Moses. Burning bush. God commissions Moses to return to Egypt. Moses is disinclined to accept the job offer. He wants to know who he’s working for, so he asks (Ex 3.13-15):

Precisely what does the name “I am” tell us about God? What’s it tell us about God that he gives himself to us to be named? And what specifically is revealed about God in his answer (“I am”)? I confess I simply don’t see what exegetical or other contextual clues the Orthodox and other advocates of divine timelessness see here that convince them we here have the timelessness of God being revealed in the name “I am.”

I don’t see it. And contextually I don’t know how others see it. It looks like a classic case of eisogesis, but I could be wrong. In one recent conversation it was suggested that Ex 3.14 settles the question of the temporal status of God’s existence (as timeless) since God is always “I am” (never “I was” or “I shall be”). And this is bolstered by Ex 3.15’s “…this is my name ‘forever’ (the Hebrew supposedly implying timeless eternity). The logic escapes me, that is, if we’re just attempting at this point to understand the text on its own terms. “I am” is as ‘temporal’ as “I was” and “I will be.” The Hebrews ‘olam’ doesn’t inherently imply timeless eternity. Things that come into being and pass out of being are called ‘olam’.

Why couldn’t a (qualifiedly) temporal God always be “I am”? And what of Rev. 1.8’s “the one who is [“ho on”], who was, and who is to come.” I’m told this is easily reconciled to divine timelessness because in context, Ex 3 is describing God’s being as God (and thus timeless), while in Rev 1 we have Jesus who is God in his incarnate (and thus temporal) state as the subject of “is, was, is to come.”

I still don’t see it. I can see how somebody already committed to the belief that God is timeless can construe these passages to confirm a view they already hold. But to argue these passages inform such a belief? That’s my struggle.

However, it doesn’t seem a stretch to me to read Ex 3 as having nothing whatsoever to do with an ontology of time or the temporal status of God’s being/existence per se. Indeed, it’s hard to see how the ‘timeless’ interpretation of the name “I am” would be a relevant piece of information to share with Moses and Israel given their context. Names in ancient Israel weren’t just place-holders or means of commanding someone’s attention. I’m “Tom” because that’s just what you ‘say’ when you want to get my attention. In English that’s all names are. We don’t really invest names with any significance beyond that minimal utility.

In ancient Israel a name was more than just a thing to say to get somebody’s attention (though undoubtedly in non-religious contexts names take on that function too). And when it came to God, names were all the more important. But what’s evident from looking at the names themselves is that they describe an event or an experience that reveals who God is and what his character and intentions are. The divine names name a place and a time where God acted on someone’s behalf. It makes perfect contextual sense to read “I am” simply as God declaring this truth about himself, namely (no pun intended): God gives himself to us to be named as the one who is _______, and the blank is God’s invitation (and promise) to discover him in the specific terms of our finite needs. This truth stands behind a dozen or so extensions of the name in such terms: Jehovah-Heals, Jehovah-Hears, Jehovah-Sees, Jehovah-Justifies, Jehovah-Provides, Jehovah-Defends Us, Jehovah-Our Banner. These all describe our experience of God.

One can go through the “Jehovah-Present-tense verb” names and discover who God is and what kind of God God is. The names of God name the place and conditions upon which God is experienced. That makes sense of the function of names in Israel’s ancient Semitic culture and the more specific context of Moses’s question and Israel’s needs. But the divine names also reveal us within that relationship. When we learn something about God we see the truth about ourselves. When we get clear on who he is, we see ourselves in proper perspective. If God is Jehovah-Provides, for example, what’s that make me? It makes me dependent upon him, in need of him. I come to see the truth of my finitude and need. If God’s name is Jehovah-Sees, what’s that make us? It means we are not alone. We are known to God. We’re not abandoned, not forsaken.

Another interesting way to approach the “I am” of Ex 3 is to consider the religious Canaanite and Egyptian context. It helps us understand why Moses even asks God what his name is. The Canaanites had Anat (virgin goddess of war), Dagon (god of crop fertility), Molech (god of fire), Resheph (god of plagues/healing), Baal-Haddad (storm god), and a dozen others, including El (the most high god) who is shared by Israel. The same thing can be said for the Egyptian gods. The function of naming among pagans identified finite deities with limited responsibilities within the cosmos. You might say pagan deities derived their identities from the cosmos through their roles in maintaining it. This undoubtedly lies behind Moses’ question. “What’s your name?” essentially means “Which god are you? Where do you fit in the scale of deities? What’s your rank? Which part of the cycle of life and death are you responsible for?” That, I suggest, is what’s going on in Ex 3, and it has nothing to do with speculations about God and time. “I am that I am” is well-suited as an answer to Moses’ question as revealing the categorical difference between the One who is addressing Moses and all the other pagan deities. That difference isn’t that they’re all temporal while this One is timeless. What is Moses supposed to do with that? But there’s great benefit in being told that this One does not derive his identity from any earthly function, or even all of them together, that this One isn’t to be found in a police-like line-up of local deities who just are their relationship with the world’s cycle of seasons, births, deaths, marriages, fertility, etc. Unlike these deities, this One’s identity is not reducible to a function within the finitude of the world. That, I suggest, is grounds for a covenant relationship to build a nation upon. But “I’m timeless”?

I’m suggesting that in Ex 3 God grounds future covenant with Israel by stepping out and away from membership in the rank and file deities of Canaan and Egypt and how people related to deity per se. God (“I am that I am”) names the place and time where he is experienced and worshiped and is categorically unique in possessing the fullness and freedom of his own existence and identity in himself, not deriving from nor reduced to any function within the cosmos—unlike the competition. But none of this says anything about time.

But if the covenant name of God just means “I’m timeless,” I don’t see any easy way to connect this meaning to how the name is actually used in Scripture to describe God acting in concrete ways to speak, call, heal, save, etc. I don’t doubt that advocates of divine timeless believe God acts on our behalf. I’m saying I can’t see the logic that requires us to understand the name as asserting ‘timeless existence’ to get into the concrete world of the names.