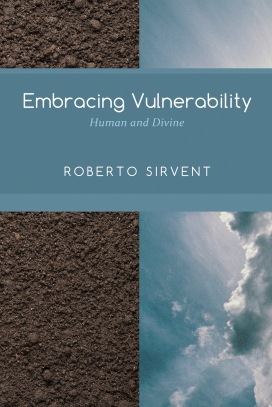 Roberto Sirvent, Assistant Professor of Political and Social Ethics at Hope International University, has written a provocative book on the immorality of impassibility. The book, Embracing Vulnerability Human and Divine (2014), is the published version of Sirvent’s PhD thesis (London School of Theology). It’s clearly argued, thoughtful, and irenic. I was especially interested in this thesis, having begun (and having been unable to finish, alas) a PhD track of my own at the same school pursuing precisely the opposite thesis as Sirvent here argues. Sirvent is of interest to open theists as well, given their debate over the relationship between divine (im)passibilism (understood broadly) and divine epistemic openness with respect to future contingents (i.e., the ‘open view’ of the future). No doubt he offers open theists a new, more sophisticated, line of approach in arguing for a strong version of divine passibilism. I believe John Sanders is working on a review of sorts. I’d love to see Sirvent’s arguments engaged at length, and to encourage that along, as well as for my own sake, I thought I’d review Sirvent’s main arguments and offer some responses. It’s not a long book (177 pages), but it is compact and to the point.

Sirvent’s essential argument is simple: divine impassibilism is incompatible with the imitation of God ethic (imitatio Dei). An impassible God is, to put it simply, “not worth imitating.” Imitatio Dei is, Sirvent argues, a biblically derived ethic that asserts that “the most virtuous way of life comes by imitating the divine moral nature.” As such it offers a normative methodology for thinking through moral questions. Because human beings are created in the divine image, we and God are accountable to one and the same moral standard. On the basis of the essential similarity between us and God, “we should therefore look to normative accounts of love and justice as humans experience them for evidence of the way God experiences them.”

Sirvent is clear on the particular understanding of impassibility he’s means. Impassibilism is “immutability with regard to one’s feelings, and the incapacity of being acted upon and having one’s emotional experience changed by an external force.” Fair enough. I think this definition is worth discussing a bit, but we’ll go with it since that’s what he’s working with. I thought at first Sirvent might be working with a strongly classical understanding of impassibility that held to an unqualified immutability entailed in a view of actus purus as holding there to be no conceivable unrealized potential in God. I don’t espouse impassibility in this strong sense. But Sirvent also means to rule out as immoral understandings of God’s existential fullness and beatitude that do not argue along such an understanding of actus purus (i.e., what some appear to be calling ‘weak’ impassibilism).

While some theories of divine impassibility refuse to attribute any emotion to the divine realm, many modern accounts argue powerfully for a “healthy emotional life” in God. Where these accounts still fall short—normatively speaking—is by systemically rejecting that God is capable of being acted upon and having his emotional experience changed by an external force. If in fact God cannot experience emotional vulnerability in this fashion, I argue, then he is not worth imitating. To develop this idea, I argue that a constitutive element of love and justice is vulnerability to the other. No matter what modern account we subscribe to, love necessarily involves a concern for the other person, a bestowal or recognition of value for the relationship, recognition of a union with one another, or an intimate identification with the beloved. Indeed, none of these foundations for love are [sic] compatible with impassibility. Similarly, an impassible being would be unable to possess the virtue of justice since emotional vulnerability is also constitutive of its corollaries: compassion, empathy, and forgiveness.

So even if one were to claim (with careful qualifications) that God temporally engages and knows the changing, temporal world (and so is not immutable in every conceivable sense), so long as one were to view the experienced fullness of the triune relations as fully accomplished and thus undiminishable existentially speaking, one would still possess a view of God that Sirvent considers morally bankrupt and so incapable of providing justifiable grounds for thinking God worth imitating.

As such Sirvent is offering imitatio Dei as the “chief instrument by which we perform this ‘moral diagnosis’ on our theological commitment.” The doctrine of impassibility, however sound its philosophical or metaphysical support may be, is illegitimate from a moral point of view. Without emotional vulnerability we simply cannot live fully virtuous lives, lives worth living. Impassibility is “morally bankrupt,” or as his ch. 6 words it, impassibility is immoral. Now, to claim that believing God to be unimprovable and undiminishable beatitude is “morally bankrupt” is huge, and though I think in the end he’s unsuccessful, I have to applaud Sirvent’s boldness.

The book builds a cumulative case. It begins with the univocal nature of theological language (Introduction), lays out a biblical case for imitatio Dei involving a shared (and independent) moral standard between God and human beings (ch. 3), presents reasons for thinking that emotional vulnerability is constitutive of love and justice per se (ch. 4), illustrates these claims with various Old Testament passages (ch. 5), and lastly treats Christology (briefly) and further evaluates how impassibility is incompatible with imitatio Dei (ch. 6).

I’ll devote a second post to summarizing the flow of his arguments in more detail and then move on to some responses.

2 comments on “The immorality of impassibility—Part 1”