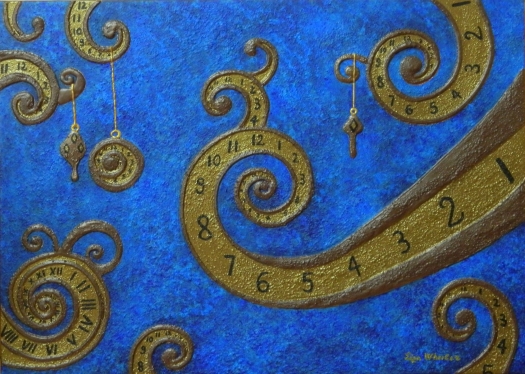 Down in the comments section of creatio ex nihilo we’re having a wonderful and challenging conversation about God and time. At least once a year (pun intended) I jump into the deep of this particular pool, try to swim impressively, then quickly dog-paddle to the side ladder where I can climb out. But since in this conversation I found myself referring back to things we’ve said here in the past (or, if you’re the Orthodox God, things we’re saying eternally), so I thought it would be helpful to provide links and a couple of lines from those past posts in the hopes of shedding light on my view and journey:

From a reply of mine to Fr Aidan:

In fact, it’s because we affirm God’s freedom from the world that we think God should be conceived of as ‘actually’ free from creation and not merely ‘formally’ (‘abstractly’) free from the world.

It’s our conviction that the divine actuality (as the plenitude of being, as unimprovable aesthetic satisfaction, as the utterly complete and imperturbable divine relations) is free from creation and this encourages us to conclude God is ‘actually’ free from creation, not just free on paper (‘formally’ free, as it were). But in the classical view of God as actus purus, God is never ‘actually’ free from his determination to create (viz., God’s actuality is never not defined by God’s determination to create). On the contrary, God actually just is his determination to create and that determination defines him essentially, eternally, etc. (as McCabe shows — there is no God apart from the God who creates), which to us denies that God is free from creation. We think a qualified view of divine temporality can better affirm both the essential divine freedom and triune fullness and creation’s absolute gratuity without historicizing that transcendent fullness by assuming God becomes God in all the objectionable ways process theology (on the one hand) and Jenson and McCormack (on the other) advocate.

From It’s that time again:

If God were temporal (in some, very qualified sense—not speculating right now), what might that not mean? Well, God would certainly be unlike created-temporal beings in that God wouldn’t suffer the ravages of time as we do. God would not age or forget. In addition, we’ve argued here that God cannot suffer ‘existential loss’ in the sense of pining for the good of some ‘past’ experience or, for that matter, with respect to some future good. Why not? Because “every good and perfect gift comes from God.” Whatever past goods there may be to God (on the assumption the creation’s past is past in some sense for God as well), God remains the goodness they were, and whatever good is to be redeemed for the created bearer of such goodness, God is always already the source and fullness of it. Hence, there can be no loss of experienced goodness for him whose necessary life is the fullness of the Good, the True and the Beautiful. In short, the passage of time (assuming for the moment some such passage for God) could mean nothing to the existential fullness or beatitude of God’s being. Here I don’t mind Boethius’ phrase: “Eternity is the simultaneous and complete possession of infinite life” by which all I would mean is a fullness of life which is not a temporal achievement. That is, I wouldn’t historicize the fullness of God’s triune being as if that fullness is ‘temporally derived’. That just seems to follow from necessary existence.

From Taking time for space or making space for time?:

Point is, the actuality of created entities is one and the same with the actuality of God’s sustaining them. You can’t make the latter eternal without making the former eternal (I don’t think). I hold the former not to be eternal, and that is why I advocate for a qualified sense of God’s being temporal. To not do so would, I think, mean holding it to be the case that every temporal event within what we describe as the world’s timeline or history eternally abides in its actuality in God’s unchanging perspective or act of knowing, a kind of “unblinking cosmic stare.” This would mean God doesn’t make (i.e., doesn’t know) the (presentist) distinction between:

I’m not sure what advocates of divine timelessness would hold about the distinction between these in God. Perhaps all three are distinctly present in God. But that sure looks like the ‘block view’ of the universe to me. It would then be the case that each of the following would be equally true for God:

All these would be equally, eternally ‘actual’ to God. Even if it derives its being from God, it does so eternally. That’s what I’m hearing in the claim that God’s perspective on and sustaining/conserving of the cosmos doesn’t have a past, present, and future. And it’s here that the “Tilt” lights go on in my head—unlike anything relative to God’s transcendence of space.

From The future becoming the present:

What would ‘past’ and ‘future’ be for someone whose ‘present’ experience was existentially satisfied in every self-constituting way (that is, in every way important to and definitive for personal identity and existential fulfillment)? The ‘past’ couldn’t be remembered with any sense of regret, longing, or pinning for what was or what might have been. It would cast no shadow upon the present, nor could it suggest any correction or alternative to it. Whatever the past would be to the present, however one’s ‘memory’ might figure into the satisfaction of the present, it would not define the present by means of contrasting it to unfulfilled desire or counterfactual reasoning (what ‘might have’ been but is not). (Rom 8.18 comes to mind.)

I think of God’s relationship to ‘time’ along such lines. Where time constitutes a kind of metaphysical presupposition for our existence (we’re temporal in a prerequisite sort of way), God (being necessary) could not sustain that kind of relationship to time. There are no metaphysical presuppositions to uncreated being. That goes without saying. In that sense time flows from God.