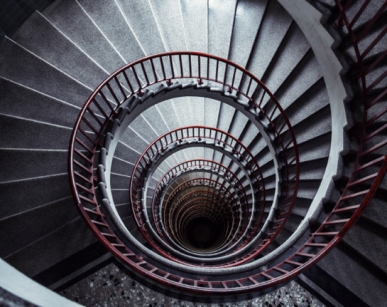 I believe in creatio ex nihilo (CEN), or creation out of nothing. I’ve always taken this to mean the created order ‘began to be’. I don’t get into debates over the temporal semantics of such a unique beginning (for example, in what sense can we talk about God “before” creation?), but I do understand “being created” as entailing “having begun to exist.” I also equate “being created” with “being a subject of temporal becoming.” But there are certain implications to supposing creation is eternal that present problems. So let me grope around here and try to make some sense of my questions.

Recently the distinction between kinds of “contingency” came up in a conversation with Bill Vallicella. He had posted on this distinction in reply to Fr Aidan’s request. I asked a few questions. Bill responded.

Bill makes a distinction between two kinds of contingency:

These are meaningful categories under which to contemplate the nature of things. My questions engage a further step Bill made regarding the relationship between modal necessity/contingency and dependent contingency/non-contingency. Hopefully the quadrants below will clarify my issues. 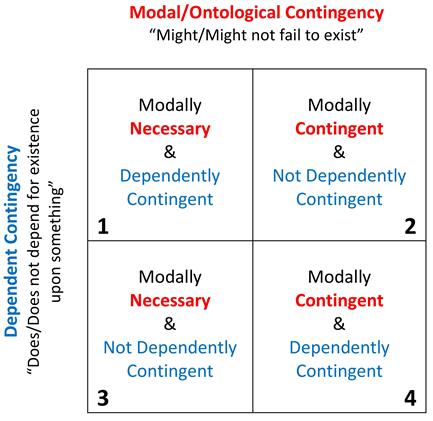 An example of a Quad 3 reality would be (carefully said) “God” who exists necessarily and depends upon nothing for his existence. An example of a Quad 4 reality would (in my view) be all non-divine realities (the world and all that is in it) as created. Quad 1 arguably is empty since (I’m assuming here) nothing can exist necessarily which also depends for its existence as such upon something outside itself.

Now we come to my first difficulty—Quad 2, that is, things that are modally/ontologically contingent (they might fail to exist) but their existence, though contingent, depends upon nothing whatsoever. Their existence is a “brute fact.” Nothing ‘explains’ or ‘accounts for’ their existing. Bill finds this a meaningful concept. I don’t.

My second difficulty has to do with the temporal nature and implications of modally contingent realities. For the sake of argument, let’s limit this to Quad 4. Is it intrinsic to such realities that they “begin to exist”? Bill and, as I’m discovering, every modern Orthodox person I ask about this curiously hold that Quad 4 realities needn’t be thought of as having a beginning. Being “created” doesn’t entail “beginning to exist.” Entities may be modally/ontologically contingent (i.e., they may not have existed at all and may fail to exist), and they may depend upon God for their existence, but they have always existed and always will exist. Their modal contingency requires only that it be true that they “may” not have existed or they may cease to exist, not that it be the case that they “began to exist.” Thus the “out of nothing” in CEN (on this view) merely describes a “dependency” relationship. It says nothing about whether creation is eternal or whether it “began” to be.

I’ll just leave the descriptions there for now and come back with a follow-up post to share some thoughts on why it seems to me we should think of non-divine, created being as (among other things) “having a beginning.”

8 comments on “To begin or not to begin, that is the question—Part 1”