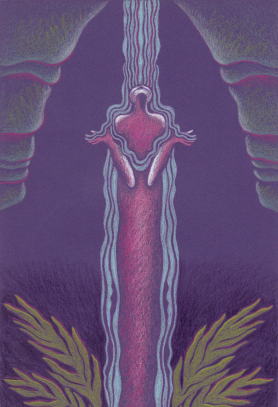 I had time today to reread Don Alexander’s The Humanity of Christ and the Healing of the Dysfunction of the Human Spirit, a helpful book that focuses on the inherent relational structure of human being as ‘spirit’. He connects to James Loder at various points, and there’s no talking about Loder without exploring Kierkegaard. This is a helpful book that discusses the healing of humanity in ‘relational’ terms. Here’s a portion of Ch. 2, “The Nature and Function of the Human Spirit”:

Characteristics of the Human Spirit
Kierkegaard: The Spiritual Self as a Relational Self

In an opaque passage in his book Sickness Unto Death, Soren Kierkegaard designates the human person as essentially spirit. As quoted above, Kierkegaard writes,

The human self as spirit, however, is not simply a self-interacting being. This self-relational capacity also constitutes the ontological ground for relational interaction outside oneself; that is, with others. Kierkegaard writes, “The human self is…a relation that relates itself to itself and in relating itself to itself relates itself to another.” In a different, yet complementary, context, the Chinese philosopher, Confucius, makes a similar observation, “A person cannot be humane [virtuous] apart from his/her neighbor.” In other words, the human person cannot be understood fully in isolation or a lack of interaction with others since the individual self is not a simple entity but entails a complex capacity for relationship between two disparate things. James Loder expresses a complementary understanding of the human spirit when he writes “The human spirit is a quality of relationality; it is a way to conceptualize the dynamic interactive unity by which two disparate things are held together without loss of their diversity.”

While Loder interprets the human spirit as a quality of relationality, I prefer capacity for personal relationality. The change of phrase is intended to reinforce a particular perspective. I want to ascribe an ontological dimension to the human spirit. Perhaps the term ontology is a little too precise. Nevertheless, I want to contend that the human spirit is really something rather than a mere relationship or an emergent property of brain function. The human person is a self that in relating to the self relates to something: namely, the self that is spirit. If the human person is spirit, the human person as spirit, then, understands itself principally, though not exclusively, through relation with others. The human spirit is not simply an independent autonomous self, but is a self-relating self…

To assert, then, that the core of human personhood is essentially spirit means that the human spirit exists ontologically as the ground for relationality and existentially as the experience of self-relatedness with others. It is, however, in the interaction with other that the functional nature of the human person as spirit is revealed.

This interactive-relational capacity of the human spirit, argues Kierkegaard, functions in a context of opposites since the human self is “a synthesis of the infinite and the finite, of the temporal and the eternal, of freedom and necessity.” Consequently, the decisive matter for becoming a self lies in the nature of the opposites. The opposites, argues Kierkegaard, form the ground for relationality in that they provide the context for a potential shift from being negative, i.e., “a relation that exists primarily through opposition,” to a positive one, i.e., “one that has power in its own right to define the polarities and their relationship.” James Loder illustrates the significance of this relational movement between opposites by noting, “The quality of opposition that pertains between male and female and of their love relationship which completes each in, with, and for the other, and is itself transcendent with respect to the opposition [difference] between them.”

At first, notes Loder, the opposition or distance of identity appears, but the opposition changes as male and female come to enjoy other’s company and a love relationship develops. The relationship, states Loder, “which was first established on a premise of opposition becomes positive, even a dominant force in the interaction between the two: each increasingly begins to define him/herself in terms of the relationship, per se. In this relationship the polarities of male and female are not lost; rather mutuality hightens individuality. The point of the illustration is that “mutuality becomes a positive third term, not obliterating but intensifying the polarities.” Here the pattern of relationality governing “the self as spirit,” suggests James Loder, “is perichoretic; that is, inter-penetrating,” a theologicall insightful and helpful concept in grasping the relationality between creaturely existence and the human spirit illustrated by the male/female relationship…

If I understand Kierkegaard correctly, it is only when “the self-transcendent agency [the human spirit] of the self finds its ground outside and beyond the pattern of self-relatedness can self-relatedness be sustained.” “When the self is ‘transparently grounded in the power that posits it’,” writes Loder, “it is, then, spirit.” What is central here is a relationship of mutual coinherence; that is “opposites are coinherent in and through this relatedness, and the relatedness is coinherent with itself.” This entails the interpretation that “the self cannot be itself without its centered grounding beyond itself, but must be a participant in the ground such that its life is preserved and its integrity as spirit is sustained by that ground.” Kierkegaard, then, will place the self-relationality of the human person in a unique position between the nature of God and the nature of the human person as spirit.

At this juncture an important element in the understanding of the relational nature of human persons as spirit enters; namely, “that the self measures itself by the ideal to which it relates itself.” C. Stephen Evans comments on this Kierkegaardian perspective. To be a self is to be “a being who is striving toward a certain ideal; this ideal provides the measure or criterion for the self that is derived from the conscious relationships that have formed the self.” While many factors contribute to the person we are and will become (parents, friends, social influences, etc.), genuine selfhood, in the Kierkegaardian perspective, “requires that I stand before God, accepting the self I am as a gift from God and the self I should become as a talk God has set for me.” Hence, the person that I become emerges from the relational character of the self as the result of the conscious decisions made with reference to the ideal I choose to follow…

Hence the self is always formed in relation to some ideal. Thus, “the self that lacks God as a conscious ideal will reflect the defective ideal that has replaced God.” “What an infinite accent falls on the self,” writes Kierkegaard, “by having God as the criterion.”