A couple of lines from David Bentley Hart’s “The Mirror of the Infinite: Gregory of Nyssa on the Vestigia Trinitatis” (Modern Theology 18:4 | October 2002) from a piece I read some time ago but which I picked this week in an attempt to occupy my mind with something as far and as different as possible from the madness which is American politics.

It’s a splendid piece. The first quote below is from Section I which summarizes trinitarian theology. The second quote is from the first half or so of Section II. Enjoy!

Our being is synthetic and bounded; just as (again to borrow a later theological vocabulary) the dynamic inseparability but incommensurability in us of essence and existence is an ineffably distant analogy of the dynamic identity of essence and existence in God, the constant pendulation between inner and outer that constitutes our identity is an ineffably distant analogy of that boundless bright diaphaneity of coinherence, in which the exteriority of relations and the interiority of identity in God are one, each Person wholly reflecting and containing and indwelling each of the others. Because for us personality is synthetic, composite, successive, and finite, we are related always in some sense “over against,” in a fragmentary way, and to be with others always involves for us a kind of death, the limit of our being. In God, though, given the simplicity of his essence, there is an absolute coincidence of relation and unity. For God, the “inwardness” of the other is each Person’s own inwardness, the “outwardness” of the other is each Person’s outwardness and manifestation.

One word came to mind upon finishing this paragraph—“fractal.” Can you see why? Fractals both contain and are contained by their content and form. They are a “coincidence of relation and unity,” a visual diaphaneity of coinherence. This shouldn’t surprise me, I thought. Wouldn’t the source and ground and giver of a world whose being and nature manifest such fractality need to be infinite as well? 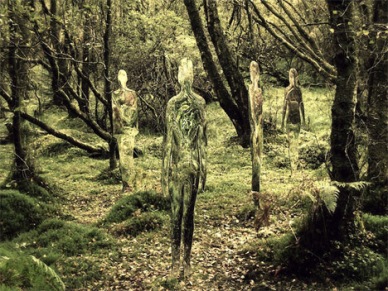 A second more lengthy portion spoke to me. Honestly, after this past year’s election cycle and particularly the role my own faith tradition played in the final result, I have wanted to give up on the Church (which my entire adult life has been dedicated to vocationally). I’m still struggling. I know it sounds weird, but I was enjoying this next portion of Hart for the escape that it provided my wanting to leave all thought of the church behind when the passage came to an uncomfortable rest in the final sentence’s nearly final word: “church.” “Crap,” I thought. There’s no escaping Christ’s Body in the earth.

Certainly if one were to attempt to isolate the one motif that pervades Gregory’s thought most thoroughly, and that might best capture in a single figure the rationality that unifies it throughout, it would be that of the mirror: the surface in which light is gathered, creating depths where none previously existed, and by which it is reflected back to the source of its radiance. One might say, to being with, that for Gregory all knowledge consists in theoria of the reflected, and this is in some sense so even within the life of God: the Son is the eternal image in which the Father contemplates and loves his essence, and thus the Father can never be conceived of without his Son, for were he alone he would have no light, truth, wisdom,, life, holiness, or power; “if ever the brightness of the Father’s glory did not shine forth, that glory would be dark and blind.” This “mirroring” is that one original act of knowledge in which each of the Persons shares; the Only Begotten, says Gregory, who dwells in the Father, sees the Father in himself, while the Spirit searches out the deeps of God. God himself is, one is tempted to say, an eternal play of the invisible and the visible, the hidden Father made luminously manifest in the infinite icon of his beauty, God “speculating” upon himself by way of his absolute self-giving, in the other. And it is from this original “circle of glory” that the “logic” of created being unfolds: a specular ontology, according to which creation is constituted as simply another inflection of an infinite light receiving God’s effulgence as that primordial gift that completes itself in summoning its own return into existence. Creation is only as the answer of light to light, a created participation in the self-donating movement of the Trinity, existing solely as the manifestation—the reflection—of the splendor of a God whose own being is manifestation: recognition and delight.

Even “material” nature, for Gregory, is entirely subsumed in this economy of reflectivity: the physical world, he says, in its interminable dialectic of constancy and change stands on the one hand in absolute contrast to divine reality, but, on the other hand, it mirrors within its extraordinary intricacy, magnitude, and inscrutability the incomprehensibility and majesty of God. And the beauty that perdures in the midst of the world’s ceaseless becoming excites in the soul a longing for the infinite beauty that it reflects. Indeed, it is not an exaggeration to say that, for Gregory, apart from that reflex of light that lies at creation’s heart, there is no world to speak of at all. Gregory, like Basil before him, in various places denies that the world possesses any material substrate apart from the intelligible acts that constitute its perceptible qualities: the world of bodies is a confluence of “thoughts,” “bare concepts,” “words,” noetic “potentialities,” proceeding from the divine nature; its esse, one might say, is percipi. The phenomenal realm is not, says Gregory, formed from any underlying matter at all, for “the divine will is the matter and substance of created things (υλη και ουσια των δημιουργηματων),” the “matter, form (κατασκευη), and power (δυναμις) of the world.” The here below, it seems, is like a mirror without tain, a depth that is pure surface, and a surface composed entirely of the light that it reflects. Otherwise said, the physical world is a “primordial, archetypal, and true music,” a purely rhythmic and harmonious complication of movements—in which, adds Gregory, human nature can discover an image of itself.

The intelligible creation, however, is an even more thoroughly specular reality. For one thing, all talk of human “nature” most properly refers, in Gregory’s thought, not merely to some abstract set of properties instantiated in any given individual, but to the pleroma of all persons who come into existence throughout time, who together constitute, as in a single body, the one humanity that God first willed in fashioning a creature in his image, the ideal anthropos who dwells eternally in the wisdom and foresight of God, comprehended “altogether in its own plenitude.” This alone is truly that “God like thing (το θεοεικελον χρημα)” in whom God has condescended to impress his likeness. When, eschatologically, its temporal unfolding is complete and it is united to the Logos as his pure and glorious body, subjected to the Father, the form of Christ will be proclaimed, made visible in a body stamped with his shape, in whose every part the divine image will shine with equal brightness. Humanity, then, is nothing, either ideally or collectively, apart from its power to display in itself the “form and fashion” of its creator; and this final beauty—this unveiling of the divine likeness—can be glimpsed even now in the church, which Gregory describes as the mirror in which the face of the sun of righteousness, Christ, has become visible within creation…. (bold emphasis mine)

2 comments on “Mirroring the Infinite: No tain, no pain”