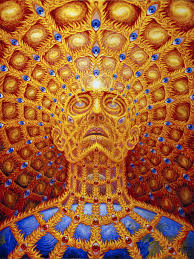 Not sure how to express this.

I sat quietly for a couple hours yesterday afternoon. I had an episode of Black Mirror (a sort of modern remake of The Twilight Zone) on. The episode got me into a kind of suspended frame of mind – a bit disconnected from the world but for that reason more connected to things that I usually am. Anita asked if I wanted to go on a walk. So we took a good 30 minute walk in a nearby park we often enjoy. It was a beautiful day here in CA, about 5 PM, sun was out but beginning to set, low 60’s, beautiful trees, lawn, flowers.

I saw everything clearly – blades of grass, hummingbirds nearby, dogs barking, children playing, Anita and I chatting. It was all equally present to me without any part of it competing for my attention. Everything (even my own body) manifested both an essential beauty and a complaining tragedy that recognized–beautiful for obvious reasons, but also tragic because temporary, passing, fading, on the edge of ceasing to be. But I didn’t feel any sense of regret or sorrow at seeing the ephemeral, fading being of all things. Though they were fading, their beauty wasn’t threatened.

There was movement, obviously. We were walking, talking. Time didn’t literally stop, but it was a kind of timeless moment, like the whole walk we took, including the words we spoke and the thoughts I had, all comprised a single unbroken present moment that didn’t suffer from coming to be or passing way, a fuller moment in which the individual parts of our walk (the steps we took, the words we spoke, etc.) all occurred, a fuller moment that was already there waiting for things to occur within it. It contained those moments but wasn’t comprised of them. Where my consciousness is typically locked into one particular location or event feeling its way through the passage of time from one event to the next, feeling some of the tragic loss of time’s passage, today I felt like my consciousness was one with a location, a perspective, that wasn’t my own (even though obviously I was experiencing it), a perspective that wasn’t coming to be and passing away, but instead it was a perspective from within the truth of all things – a truth all things reflect and toward which they tend. It’s like I was already where things were going.

A peculiar thought came to me. I thought that ‘time’ isn’t the front and center issue/problem that we often make it out to be. What mattered was simply how we situated ourselves within this all-embracing perspective that made room for things, welcomed them and gave them their beauty. I thought also that instead of giving ‘time’ the priority of place in how things are viewed and experienced, the ‘narrative’ of their being was more important. Our lives have meaning (or not) as ‘narrative’, where and how they belong in the connectedness of things. I felt as though my own personal conscious perspective was completely connected, or identified, with a perspective that already knew the story – where things came from, where they were, and where they were going, a perspective (a fuller story) that wasn’t waiting for things to happen to figure out what the story would be, but rather a perspective that integrated and gave meaning to what was happening because it was where things were going. But this sense of the present in which I was totally at rest wasn’t itself also “on its way” to becoming something else. It wasn’t just another moment like the moments it was making room for. From this fuller place from which I was apparently taking things in (which seemed to me to contain every disconnected story – good or bad – as well as the happy resolution of every story and its integration into a single, all-embracing story which story was where I felt I was at the time) I thought to myself, “All stories get redeemed. No tragic remainders to be irredeemably lost, because everything happens within this.”