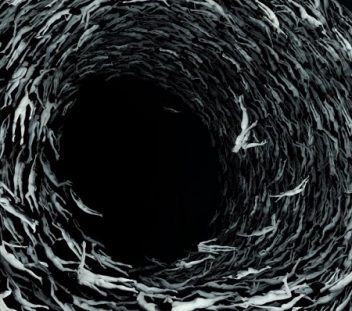 The pages of my copy of Hart’s The Beauty of the Infinite are like the layers of a Monet landscape, comments on top of comments scribbled in various mediums (pink and yellow highlighter, pencil, black ink, blue ink – whatever was nearby) from multiple visits made to re-read its wonderful reflections. Just today I happened upon this particular sobriety (BOI, p. 399-400; the brackets are mine, just to help):

Hell is with us at all times, a phantom kingdom perpetuating itself in the wastes of sinful hearts, but only becomes visible to us as hell because he true kingdom has shed its light upon history. In theological tradition, most particularly in the East, there is that school of thought that wisely makes no distinction, essentially, between the fire of hell and the light of God’s glory, and that interprets damnation as the soul’s resistance to the beauty of God’s glory, its refusal to open itself before divine love, which causes divine love to seem an exterior chastisement. Hell is the experience (a possibility in each moment) of divine glory not as beauty, but as a formless sublimity; it is the rejection of all analogical vulnerability, the sealing off of the “self” (or the cosmos) in univocal singularity, the “misreading” of creation as an aboriginal violence. The “fire” of hell is that same infinite display of semeia [signs] by which God is always declaring his love, misconstrued (though rejection) as the chaotic sublime rather than the beautiful, not susceptible of analogical appropriation, of charity; it is the soul’s refusal to become (as Gregory says) the expanding vessel into which the beauty of God endlessly flows. For exile is possible within the beauty of the infinite only by way of an exilic interiority, a fictive inwardness, where the creature can grasp itself as an isolated essence. Hell is, one might almost say, a perfectly “Kantian” place, where the twin sublimities of the star-strewn firmament above and the lofty moral “law’ within remain separated by the thin tissue of subjective moral autonomy: where this tissue has become impervious to glory, the analogy of the heavens is not the transforming voice of God but only a mute simile, an inassimilable exteriority, and so a torment. Hell is the perfect concretization of ethical freedom, perfect justice without delight, the soul’s work of legislation for itself, where ethics has achieved its final independence from aesthetics. Absolute subjective liberty is known only in hell, where the fire of divine beauty is held at by, where the divine apeiron [limitlessness] miraculously divests itself at the peras [boundary, end, extremity] that, in Christ it has already transgressed and broken open, and humbly permits the self to “create” itself. True, though hell is the purest interiority, it is also by contagion a shared interiority, a palpable fiction and common space superimposed upon creation, with a history of its own; but still, it is a turning in, a fabrication of an inward depth, a shadow, a privation, a loss of the whole outer world, a refusal of the surface. For Eastern Christian thought, in particular, it makes no difference here whether one speaks of death, sin, or hell: in each case on speaks of the same privation, the same estranging history, the same limit shattered by Easter; and hence there can be no aesthetic explanation of hell (something that few of the Fathers occasionally foolishly attempted) that would make of it a positive moment in the exposition of divine beauty, a part of the universe’s harmonious ordering of light and darkness. Hell cannot serve as an objective elements of the beautiful—as source of delight—because it is an absolute privation of form and quantity; it has no surface, nor even a shadow’s substance; its aesthetic “place” is the sealed outside of an inside.

12 comments on “Opera of the phantom”