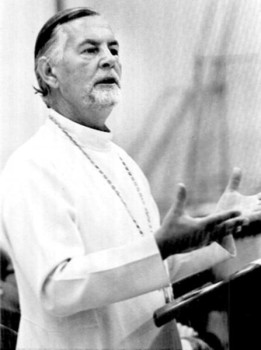 My son David called me this morning asking if I was sitting down (I was) because he had a passage from a class text he wanted to read me. David is doing his master’s (theology of worship). You have to appreciate the context. I’m an Evangelical who raised my kids in my tradition. A couple years ago David found the Anglican tradition a better fit. I couldn’t be happier for him. To add another layer, though, this particular class he’s taking is taught by an Episcopalian, and the class text he read to me was – well, it was this:

It is not accidental, therefore, that the biblical story of the Fall is centered again on food. Man ate the forbidden fruit. The fruit of that one tree, whatever else it may signify, was unlike every other fruit in the Garden: it was not offered as a gift to man. Not given, not blessed by God, it was food whose eating was condemned to be communion with itself alone, and not with God. It is the image of the world loved for itself, and eating it is the image of life understood as an end in itself.

To love is not easy, and mankind has chosen not to return God’s love. Man has loved the world, but as an end in itself and not as transparent to God. He has done it so consistently that it has become something that is “in the air.” It seems natural for man to experience the world as opaque, and not shot through with the presence of God. It seems natural to live a life of thanksgiving for God’s gift of a world. It seems natural not to be eucharistic.

The world is a fallen world because it has fallen away from the awareness that God is all in all. The accumulation of this disregard for God is the original sin that blights the world. And even the religion of this fallen world cannot heal or redeem it, for it has accepted the reduction of God to an area called “sacred” (“spiritual,” “supernatural”)—as opposed to the world as “profane.” It has accepted the all-embracing secularism with attempts to steal the world away from God.

The natural dependence of man upon the world was intended to be transformed constantly into communion with God in whom is all life. Man was to be the priest of a eucharist, offering the world to God, and in this offering he was to receive the gift of life. But in the fallen world man does not have the priestly power to do this. His dependence on the world becomes a closed circuit, and his love is deviated from its true direction. He still loves, he is still hungry. He knows he is dependent on that which is beyond him. But his love and his dependence refer only to the world in itself. He does not know that breathing can be communion with God. He does not realize that to eat can be to receive his life from God in more than its physical sense. He forgets that the world, its air or its food cannot by themselves bring life, but only as they are received and accepted for God’s sake, in God and as bearers of the divine gift of life. By themselves they can produce only the appearance of life.

When we see the world as an end in itself, everything becomes itself a value and consequently loses all value, because only in God is found the meaning (value) of everything, and the world is meaningful only when it is the “sacrament” of God’s presence. Things treated merely as things in themselves destroy themselves because only in God have they any life. The world of nature, cut off from the source of life, is a dying world. For one who thinks food in itself is the source of life, eating is communion with the dying world, it is communion with death. Food itself is dead, it is life that has died and it must be kept in refrigerators like a corpse.

This text was reconstructing his worldview, as it should. I suspected an Eastern Orthodox text, so I asked who the author was. He said, “Some guy named Alexan- ,” and I interrupted, “Alexander Schmemann?” “Yeah, that guy,” he said. “And the text,” I asked, “Is it For the Life of the World?” “Yes!” he reacted, “How’d you know?”