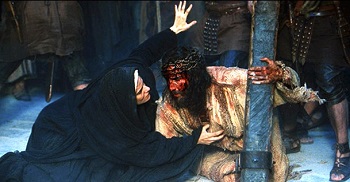 My interest in Jesus’ so-called Cry of Dereliction borders on the obsessive. I apologize. But I do think how one imagines the Father-Son relation at this moment has a great deal to do with how we imagine and relate to God. Jesus apparently thought so:

“Do you now believe?” Jesus replied. “A time is coming and in fact has come when you will be scattered, each to your own home. You will leave me all alone. Yet I am not alone, for my Father is with me. I have told you these things so that in me you may have peace. In this world you will have trouble. But take heart! I have overcome the world.” (Jn 16.31-33)

Jesus explicitly offers his own upcoming suffering as grounds upon which he wants the disciples to understand how they will know his peace in their own afflictions. How the Father would be with Jesus in his suffering is how God will be with them in their suffering. There’s no room in this for penal aspirations to weave their dark magic.

A year ago I ran across some thoughts about the Cross by R. C. Sproul:

…the Father had imputed to [Jesus] every sin of every one of his people…the most intense, dense concentration of evil ever experienced on this planet was exhibited. Jesus was the ultimate obscenity. So what happened? God is too holy to look at sin. He could not bear to look at that concentrated monumental condensation of evil, so he averted his eyes from his Son. The light of his countenance was turned off. All blessedness was removed from his Son, whom he loved, and in its place was the full measure of the divine curse… It was as if there was a cry from heaven, as if Jesus heard the words “God damn you,” because that’s what it meant to be cursed and under the anathema of the Father… [and] every person who has not been covered by the righteousness of Christ draws every breath under the curse of God.

I followed this quote back then with the words “Finally Sproul and Greg [Boyd] agree on something.” That got me in a bit of hot water with some friends. I clarified then, but having run into Sproul’s comments again recently, I thought I’d bring the comparison up here – since Sproul and Greg sharing so fundamental a view would surprise fans of both.

True, Greg has very deep and genuine pastoral sensibilities for people. He wouldn’t express himself as Sproul does (viz., the Father saying “God damn you!” to Jesus). But I’m not comparing their sentiments. I’m comparing only the structure and logic of the exchange that defines the “curse-wrath-abandonment” paradigm for each. On that score they agree. God “makes Jesus to become sin” (2Cor 5) and Jesus becomes “cursed” (Gal 3) for us, two key passages repeatedly used by Greg to structure his understanding of how Christ saves us. And this “curse” is God’s just wrath-as-withdrawal/abandonment. Greg and Sproul would disagree about election, God’s universal love, God as essential love, and many other things. But the basic structure of the exchange that defines atonement seems to me the same in each:

– Jesus “becomes sin” on the Cross (2Cor 5) and is “cursed” (Gal 3.13)
– In such a cursed state, Jesus suffers God’s wrath, that wrath being the Father’s withdrawal of filial intimacy, bringing Christ into an experience of the despair (as ‘godforsakenness’) we deserve.

Note too that the godforsakeness which Jesus suffers is not due to anything human beings do to him. It is due to the Father’s withdrawal. This is the key similarity between Sproul and Greg – it is what transpires between Father and Son which saves us. And because the divine filiation is infinitely valuable, God’s suffering its loss in that moment is infinite. Like I said, finally Sproul and Greg agree on something.