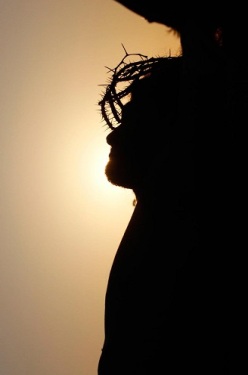 I’m pondering how my own understanding of the Cross has radically changed the past decade or so. I haven’t run into anyone who publicly expressed things as well as Fr. Bunta. I hope you enjoy his comments (video below). If you grew up Evangelical, as did I, you’ll recognize how very different this view of the Cross is from anything you heard on Sunday growing up.

Being Holy Week, every pulpit in America is devoting its voice to proclaim the mystery of Cross but not all are sharing the same Cross. Not even close. Some will exalt this perspective:

…the Father had imputed to [Jesus] every sin of every one of his people…the most intense, dense concentration of evil ever experienced on this planet was exhibited. Jesus was the ultimate obscenity. So what happened? God is too holy to look at sin. He could not bear to look at that concentrated monumental condensation of evil, so he averted his eyes from his Son. The light of his countenance was turned off. All blessedness was removed from his Son, whom he loved, and in its place was the full measure of the divine curse… It was as if there was a cry from heaven, as if Jesus heard the words “God damn you,” because that’s what it meant to be cursed and under the anathema of the Father… [and] every person who has not been covered by the righteousness of Christ draws every breath under the curse of God. (R. C. Sproul)

I faintly remember believing such things. Jesus’ view of his own cross began to redefine it for me. On the eve of his crucifixion:

Do you now believe?” Jesus replied. “A time is coming and in fact has come when you will be scattered, each to your own home. You will leave me all alone. Yet I am not alone, for my Father is with me. I have told you these things so that in me you may have peace. In this world you will have trouble. But take heart! I have overcome the world. (Jn 16.31-33)

Interesting, no? Jesus wants his disciples to understand from how he suffers how they shall possess his peace in their own upcoming afflictions. That is, how the Father would be with Jesus in his suffering is thus how God is with us in our suffering – precisely the opposite point which interpreters make who view Jesus’ as experiencing utter spiritual dereliction and godforsakenness.

The Prince of this world is coming. He has no hold on/in me, but he comes so that the world may learn that I love the Father and do exactly what my Father has commanded me.

Of course, some prefer to suppose Jesus was mistaken, that he in fact encountered on the Cross a horror he did not expect, namely, the realization that the Father had abandoned him, that the Father was not “with him” as he anticipated (Jn 16.31-33 above). Such a view has to assume Jesus is being described (after the fact, by John and others who believed in the resurrection) as having fundamentally misunderstood the nature of his own passion.

Peace I leave with you; my peace I give you. I do not give to you as the world gives. Do not let your hearts be troubled and do not be afraid.

When is this true? Where is it true? How is it true? It’s true on the night of his betrayal when he utters these words, but will it be true for Jesus a few hours later as he hangs on the Cross? Here, I proposed, is an assurance Jesus leaves his disciples on the eve of his lynching, an interpretation on the Cross which we fail to connect to the Cross, or if we do make a connection it’s only to point out that the Cross is the one place where this assurance fails to define for Jesus the truth of his existence. We think this because we believe its failing to be true for him is the cost he must endure so it can be true for us.

Please take a fresh look this week. Approach the Cross this week from Jesus’ own perspective. Consider: What he promises on the eve of his crucifixion, his Cross actually demonstrates; that the peace Jesus leaves his disciples prior to being crucified he himself actually possesses and embodies as he is murdered, and that only if his own assurances are true for him then and there can they be true for us here and now.

You will leave me, but he won’t.
You feel abandoned, but I don’t.
You’ve heard it said “Cursed is he
who judged by us hangs on a tree.”
“Father, forgive!” is what I said.
You expect despair instead.
But the gospel there was writ by me
in the language of Our unity.
“But,” you ask, “What sort of diction
would utter cries of dereliction?”
“He hangs abandoned!” you surmise.
But I was ne’er alone — surprise!
Come closer then and take a look,
I got those words from your own Book!
I suffered what drives you insane,
drank it down, all the pain,
from inside it all to say,
“I am my Father’s anyway!”
Did you really think that Hell
would God’s defeat know how to spell?
Not in all eternity could conceivability
conjure up a way to severe
Son from Father. No, not ever.

A relevant post of my own that touches on this is The Cross: Substitution and Participation.